While narrowing down my long-list for the pilot audio works, I received an invitation to come to the medieval Tithe Barn at Bradford On Avon (half a mile from town centre off B3109, OS landranger 173 ST823604), a place I would love to be able to consider for a potential live work.

On Tuesday 22nd and Wednesday the 23rd July, I made two initial visits, during which I recorded some initial voice and sound experiments, took some photos, and met up with Judy Eglington and John Edwards. They are involved with Barnstorm which put on the first theatre production to take place in the Tithe Barn, as well as being active in current productions in the town and region such as Monteverdi’s The Return Of Ulysses at the Ilford Arts Festival.

We talked about how, when entering the large space of the barn interior, the first thought can be to create a reverberation of sound, such as with the voice or with handclaps. Judy and John commented that it is the experience of being in the space itself, un-obscured, which is the thing most visitors value and remark on. Often it is children who can’t resist actually doing making sound, and it made us speculate and wonder about the acoustic properties of the barn for voices, especially as such barns have been called the ‘cathedrals of the land’. We remarked on how the echoing of sound in the barn is quite surprising – a short staccato sound particularly has a curious multiple echo, which to my ear alters into sounding almost electronic in its fading forms, literally creating ‘many voices’.

Blackberries picked on journey back from Tithe Barn

I made some recordings of my voice being thrown out into the space, and tried out some different pitches, durations and sound qualities. I then tested out single handclaps, and handclaps in fast succession. In both cases I tried different distances, moving between being at the opposite end of the barn to the recorder, as well as being at the same end with it.

I made some recordings of my hands on the walls. I found I could create textural pockmark-like sounds which seemed to audibly represent the appearance of the walls, as well as some almost breathy and voice-like pitched sounds by moving my hands flat on the wall while opening and closing them and walking slowly along the length. There were pieces of straw on the floor, and tracing the spaces between the stones with a straw tip created a crackly dry and almost fire-like sound. The ambient sounds around the barn are audible, and speak of the place and how it is currently used. Sounds captured include dogs on walks, adult and children’s voices (there is a river and playground nearby), sounds of tools being used (there are artists studios nearby), and a lorry reversing.

According to my guidebook, the Tithe Barn was:

“…built in the early years of the 14th century, it originally formed part of a range of farm buildings grouped around an open rectangular yard. Strictly speaking it is not a tithe barn at all but part of a grange. Granges were established so that monastic establishments could administer their far-flung estates. The owner [of this barn] was Shaftesbury Abbey which was the richest nunnery in England and guardian of the relics of Edward the Martyr (reigned 975-9). The produce of the nearby estates was brought across the nearby pack-horse bridge to be stored in the great barn to be sold or used by the nuns themselves. When the abbey was dissolved in 1539, the domestic buildings of the Bradford grange became a farm; the barn remaining in use until 1974.

The barn measures 168 ft (51m) long, spans 33 ft (10m) and is divided into fourteen large bays. The stunning cruck roof is divided by massive ‘A’ shaped trusses, braced underneath to form point arches. These trusses are joined together lengthwise by purlins which in turn support the rafters and the 100 tons of stone roof tiles. On the north side are two large porches, paired with two smaller ones on the south. Between the porches are threshing floors, set so that dust and chaff would blow out through the open doors.” – from English Heritage Unlocked: Guide to Free Sites in Bristol, Gloucestershire and Wiltshire

After sitting and having a packed lunch, I sought out the builders marks carved into the walls that I also read about, and photographed some. They were round patterns or single circles with different shapes inside, carved into the wall to keep tally of work completed.

On the way home I noticed the first blackberries I have seen so far this year, and since my lunchbox was now empty I picked some. In the following days, I used the blackberries and their vivid juice in a textural drawing of one of the builder’s marks. This gave me the idea that the marks could form the basis of formations of moving singers for performance, and I sketched out the idea in a second drawing. 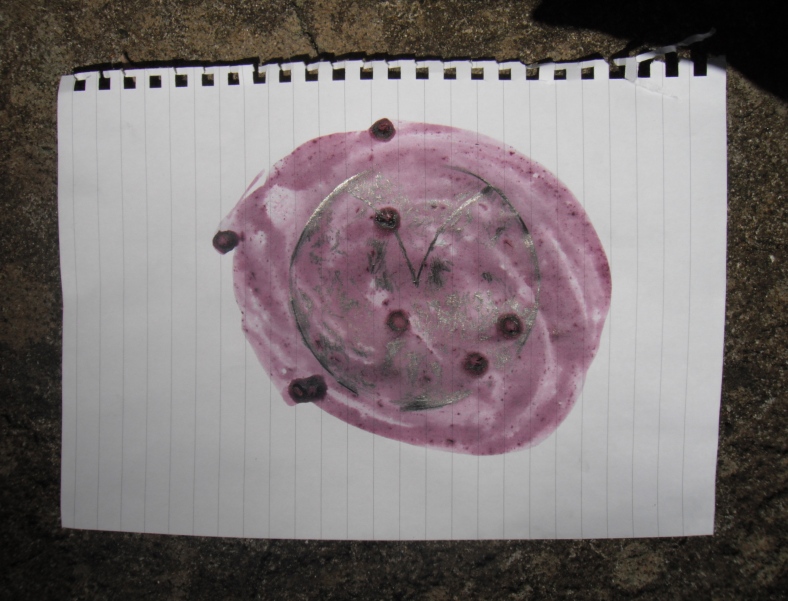 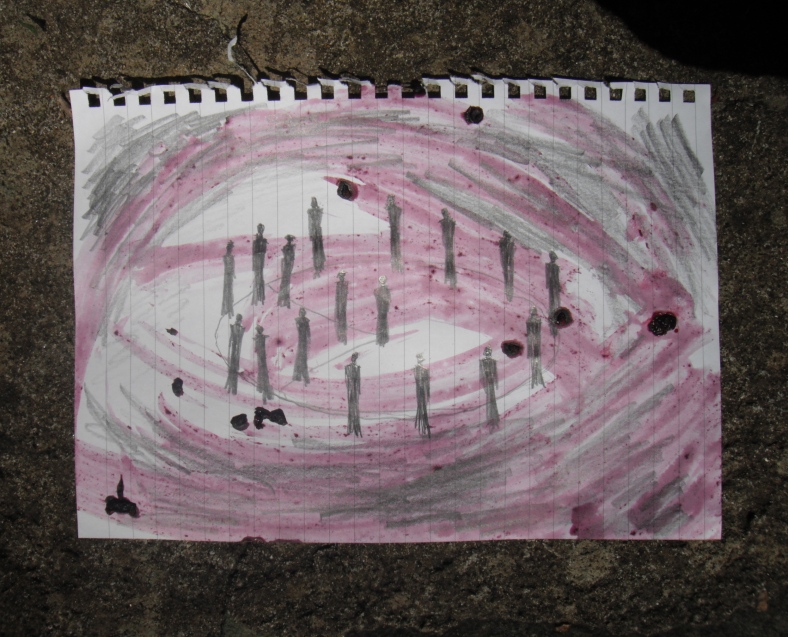 Note: these tracks are panned to use both left and right, so for the best experience use headphones or stereo speakers.

This recording is a single track of handclaps, copied and layered in phase to create a sense of duality.

The microphone picked up sounds outside the barn which there not so obvious to hear while making this recording. Listening back, I can hear that I actually pitched my first note from the sound of a reversing lorry, so I must have done a kind of non-conscious pitching in to the environment, which was a complete surprise to me. This track is an arranged composite of a single recording and its copy, one echoing the other in canon to create a kind of call and response between a single voice and its replica. In one section, I edited out the onset of the vocal sound, to leave mostly its trail and multiple echo behind, separated from its source. I like how on this track you can hear children, passing the barn to the play park near by, singing back some of the sounds they are hearing me make.

The walls of the barn are fascinating in themselves, and I wondered what they sounded like. Textural sounds can be created by gently touching the textures of the surface while holding the microphone close. The long length of the walls allow for continuous sound to be created by moving my hands flat along the wall, opening and closing them, creating pitched breath-like sounds. Pieces of dry straw found on the barn floor and used to trace the stones sounded like fire crackles, or the whirring of an old-fashioned film projector. A metallic tapping outside the barn provides a background pulse.

This short single-track recording documents the very first vocal sounds I made in the barn, allowing the multiplistic echo to ring after each sound. Listening back to the track, the mic had picked up audio from outside the barn, and it seems to create a kind of chance ‘call and response’, or antiphony in the language of polyphonic form. So my call is ‘responded’ to by a dog bark, a bike bell, a woman’s voice, and a horn. I like this notion of ‘voices’ coming from both within and without the barn.