Summer 2015: While travelling to Devon with my sister, we made a visit to Cleeve Abbey near Washford, in Somerset.

Read more about Cleeve Abbey on the English Heritage website

The abbey from the late 12th century, and was founded by Cistercian monks. It was built in their characteristic simple, unadorned style. It has all the atmosphere of a ruin, yet we found a surprising amount of it is still there; as our guidebook said:

“Although the Abbey church was destroyed soon after the dissolution of the monasteries in 1536, the cloister has survived virtually intact, and many of the rooms in the abbey still have traces of their original decoration.” The abbey was turned into a private house, and a farm, in later years.

Under construction to preserve medieval tiles

Examples of the tiles near the refectory

Some of the original wall decoration

The room the bat flew to, where I made a recording

You enter the grounds through an impressive gateway, and we read on the interpretation panel how the poor would gather there to be given food. The abbey is famous for its preserved medieval tiles, and a whole section is currently being constructed to protect them from the elements.

This property is busy enough to have staff and a shop, and must attract quite a lot of visitors, especially compared to most places I have been visiting. The staff member in the shop was really informative and enthusiastic, he loved the Abbey it was clear and we were really pleased to sense this. We roamed around with other visitors coming and going, but I managed to snatch some moments alone in some places and try out the acoustics.

We were walking through a small doorway and had a surprise encounter – in a flash, a bat suddenly came round the corner and flew right past us at speed, virtually brushing our faces, then vanished up a stairway! And after that we started noticing droppings and evidence that the current residents of the abbey are now these fascinating creatures. We went upstairs in the direction it had flown, and looked at the gaps to the roof space where there must be more bats.

I stayed there alone, put my recorder in the middle of the floor, and moving round and round, tested out the acoustics with my voice, which took the form of trying to vocalise what the movement of the bat flitting past us had been like. I found a nice tension between freeing my voice to flit to unexpected pitches both high and low, so surprising myself by my own sounds, and simultaneously maintaining a kind of control or consistency of dynamic.

Later, when I started making the sound sketch from this material, I chopped and arranged the short vocal phrases and their volume levels into an up-down-up-down pattern, to evoke the movement of wings rising and falling (see screen grab of the edit). Listening back, it sounds like several bats, coming and going, in those jerky unpredictable movements. 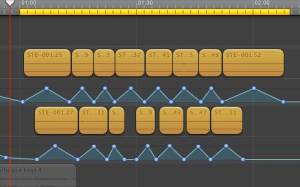 Note: this track has some fairly quiet layers within it, so for the best experience use headphones. It is a composite arrangements of field recordings, or as I call it, a ‘sound-sketch’.